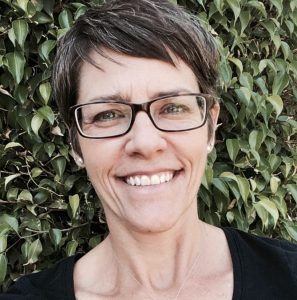 In May 1999, as a recently engaged thirty-two-year old, I was diagnosed with uterine cancer. Given the two western medicine options—hysterectomy and a relatively untested drug—I opted for door number 3: an alternative juicing therapy. Six months later, however, it became clear the cancer was too aggressive and I ended up having a hysterectomy anyway.

I never really wanted kids. I mean, I didn’t not want them, but I wasn’t the kind who had been dreaming of being a mom. However, having the choice taken away was hard. Now I would never find out if our child had my husband’s eyes or my smile. I would never experience pregnancy or the incredible reality that we made this little human.

Mourning this loss quickly gave way to the more pressing reality discovered during surgery: I had ovarian cancer as well as uterine. This meant six rounds of chemo, which meant losing my hair, which meant I was going to be a bald bride. Seriously. This is what I obsessed over on the drive home from hearing the news. Priorities.

I survived chemo and baldness and being a bald bride (I actually had a quarter inch of hair by the time the big day rolled around and wore a white hat decorated with white silk roses). Then I made every effort to put cancer behind me and move on. I went back to playing sports and working out. I launched a new career. And I didn’t really talk about not having kids, mainly because I was afraid I would start crying and I’m not a public crier. I keep painful feelings stuffed deep down and occasionally share them with my husband or my pillow or my steering wheel.

Thirteen years later, the ovarian cancer came back in my lung. I had surgery and six more roundsof chemo, but basically continued life as usual throughout treatment: I kept going to the gym and spin classes. I kept working and mentoring two high school students. Toward the end of chemo, I even started playing softball again. I was determined to make cancer the smallest part of my life possible.

Around the same time, various non-cancer-related hardships started stacking up, and I handled them the same way I handled childlessness and other painful feelings: I stuffed them and moved on. The problem with this method, as I soon discovered, is that there’s only so much room in one’s emotional holding tank. By the time I heard about a free adventure camp for adult cancer survivors, my tank was full.

At first, I didn’t seriously consider attending Epic Experience, which seeks to help cancer survivors move past their diagnosis through kayaking, snowshoeing, and other outdoor activities. Epic’s tagline is “Beyond Cancer.” Since I was already lifting weights, running, traveling—basically doing everything in my power to live beyond cancer—I felt like I didn’t need this. I don’t have serious lingering side effects. I don’t have any evidence of disease. I felt like there was probably another cancer survivor who needed an epic week more than I did. Plus, a week at Epic also involves small group and campfire chats with fellow survivors. Since I don’t readily share feelings, I wasn’t too keen on discussing them with complete strangers. The pull of a free week in the Rockies finally won, and I attended an Epic Experience camp in February 2016.

Well, I was wrong about not needing this week. I needed it in so many ways.

I needed to gaze at the mountains, breathe in that crisp air, marvel at the silent, falling snow. I needed to bask in the glorious sunshine and listen to the silence. Nature is my happy place, and this week provided a much-needed mental and emotional reboot.

I needed to play. I’m the organizer in our family. I get meals on the table and bills paid and generally allow sanity to reign. However, I’m not so good at taking care of myself or doing things just because I enjoy them (my husband has to remind me to go get a massage). Epic Experience gave me a week free of planning, cooking, or cleaning up; the volunteers did everything. I just showed up at the appropriate place wearing the appropriate gear and had fun. It really was like being a kid at camp. We sledded, threw snowballs, made snow angels, played games, and laughed.

And I needed to cry. With others. As I listened to other survivors’ stories, I found silent tears streaking down my face. I also found the courage to talk to my small group about a few of the burdens I’d been bearing, to open that emotional tank and let out a little pressure. As I shared, I cried. And I survived.

Actually, more than survived. I came home a different person. My week at Epic Experience set me on a new path of seeing the value in connection, in opening up, in sharing instead of stuffing.

I’ve since volunteered twice at Epic camps, and each time has been simultaneously fun and profoundly meaningful. During my week as a camper, I saw how the experience affected me; as a volunteer, I have seen the life-changing impact on others. As survivors tackle physical activities they haven’t tried for years, they find renewed confidence and hope for the future. As they ski, kayak, talk, laugh, and cry together, survivors find a community that continues long after they leave Colorado.

I’m so thankful I took the chance, opened that emotional tank, and started sharing. My life will never be the same.

This blog originally appeared on the Cancer Knowledge Network.