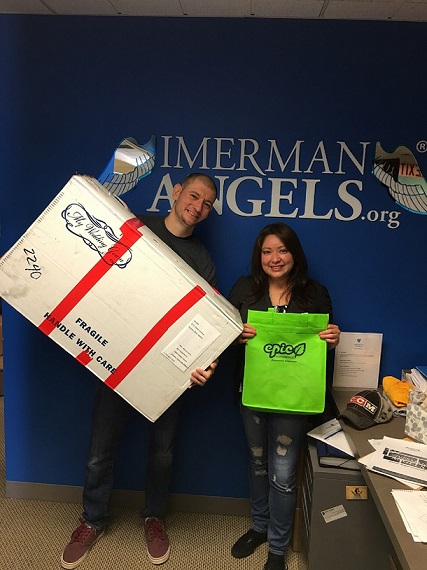 In March, 2014, Linda Perez’s fiancé, Gabriel Fisz, was diagnosed with acute lymphoblastic leukemia, PH positive – an aggressive form of the disease that required a bone marrow transplant. The prognosis was poor. Little did Linda and Gabriel know that two years later, Linda would receive a donated Vera Wang wedding dress! The couple is also in the process of starting a new life in San Diego – a move they have been talking about for awhile.

“It is mind blowing to think that all of our dreams are coming true,” Linda says.

The wedding dress giveaway came about due to the partnership between Imerman Angels and Epic Experience, an organization that offers outdoor adventure camps to cancer survivors over the age of 18. The camps are held in Colorado in the Rocky Mountains and Epic Experience hosts survivors from across the United States and Canada. The organization covers the cost of the entire week for attendees, including airfare. Camps take place during both the summer and winter. Summer activities include whitewater kayaking, while campers participate in activities like cross country skiing and snow shoeing during the winter camps.

“The camps help show cancer survivors that they can do activities they never thought they could do,” Epic Experience Founder Nancy Ferro says.

Nancy founded Epic Experience in 2012 after her son, Michael, was diagnosed with testicular cancer in 2007. Michael had a difficult time after finishing treatment, and eventually overcame it, but his struggles made Nancy wonder what she could do to help other cancer survivors.

Jessica Gripentrog, who had trouble accepting side effects as her “new normal” after finishing treatment for AML leukemia in 2012, attended one of the camps from May 28 to June 4 this year. She believes that the week helped her to adjust to life as a cancer survivor.

“It was freeing because the staff would not give us details about some activities until we arrived to do them. They would tell us how to prepare – for example, bring a bathing suit – but that was it. This was a stress reliever for me because cancer turned me into a planner, someone who always wanted to have control, and Epic Experience helped me let go of that a bit,” she says.

In addition to the camps, Epic Experience received another opportunity to help someone affected by cancer when Nancy met a former bride, Gretchen Pleshaw, who wanted to donate her wedding dress to a cancer fighter, survivor or caregiver because her aunt and grandmother had battled cancer.

“From the second I decided on that dress, I knew it had a bigger purpose than just our wedding. I wanted someone touched by cancer to feel as beautiful at her wedding as I felt at mine. And I wanted her to feel like it was her dress,” Gretchen says.

Nancy and Gretchen searched for a bride for two years. Nancy was referred to Jackie Herigodt, Imerman Angels Outreach Coordinator, by founder Jonny Imerman. Gabriel registered to become a Mentor Angel because he had a Mentor Angel who made a very positive impact on him. When Jackie heard Gabriel and Linda’s story, she contacted Nancy, who knew they had found their couple. In May, 2016, Jackie called Gabriel and Nancy to give them the good news.

“It was heartwarming to think that someone would donate their wedding dress and not want anything out of it other than to bring someone as much joy as that dress brought her. The dress is beautiful. It is a princess dress, the dress that every girl dreams of wearing,” Linda says.

“I was so excited when Nancy called me to tell me she had found our bride. When Nancy shared Linda and Gabriel’s story, it seemed like the stars aligned and it was meant to be,” Gretchen says.

Linda has certainly earned her dream dress. Gabriel started chemotherapy the day after he was diagnosed, in order to bring his white blood cell counts to zero for the bone marrow transplant. Gabriel received the transplant in July, 2014 and was admitted to the hospital for a month. Linda became Gabriel’s cancer caregiver throughout treatment, even staying at the hospital for the duration of his time there. It was a role she had played before; Linda was one of the caregivers for her nephew, Christian, during his battle with cancer.

“Being a cancer caregiver is not an easy task to take on because you have to be completely committed to being there for the person fighting. No matter how weak Gabriel got or how many times he gave up, I had to always fight for him. Yet it is also a fulfilling experience to care for someone, and to help them maintain a positive attitude and strength. It is an honor, in a sense. I witnessed strength and bravery from Gabriel and Christian. It molded me into the person I am now. Being a cancer caregiver is something that I feel I was meant to do,” Linda says.

Following the transplant, Gabriel and Linda’s lives changed completely. It became difficult for Gabriel to live his life in a normal way. He struggled to eat and changed from an active man to someone who was fighting for his life. He was also on constant alert in order to avoid relapse and the complications that could result from the transplant.

“It was great to have Linda as my cancer caregiver because we were already close, but cancer brought us even closer. And because she had helped care for Christian, she knew the ins and outs; she knew which questions to ask the doctors. Sometimes I could not digest what the doctors were saying because I was so consumed by the negativity of it all. Linda was my angel and protector in a way. She is a natural nurturer and a healer. Linda possesses the ability to be compassionate and loving, and she demonstrated patience with me when I was angry or upset. She stayed with me through thick and thin,” Gabriel says.

In February, 2015, Gabriel proposed to Linda. His original plan was to do so during a dinner at Bavette’s Bar & Boeuf in Chicago, but he could not wait. He got down on one knee and asked Linda to be his wife at the home of a client for whom Linda was nannying.

“We hugged for what felt like forever, and there were many tears from both of us,” Gabriel says.

On June 10, Imerman Angels, Epic Experience and Gabriel and Linda gathered at the Imerman Angels office to give Linda the wedding dress.

“To me, Linda and Gabe are incredible. Friday was a day of joy. It made me so happy to feel like we played a part in adding to their special day and a happy future together,” Nancy says.

Along with their upcoming wedding and move, the couple is embracing their new life in other ways. Linda registered to become a Caregiver Mentor Angel and Gabriel applied for an Epic Experience camp week. Linda also wants to donate the dress after her own wedding.

“We went through the worst already. Now it is time to live for the positive,” Gabriel says.

Other couples whose lives have been touched by cancer can turn to Wish Upon a Wedding, a nonprofit dedicated to granting wedding wishes for those facing serious illnesses. Find out if the organization can help you.

Get free one-on-one support from someone who has been there or provide critical support as a Mentor Angel through Imerman Angels.

Apply for an Epic Experience camp week to have an adventure and learn what you are capable of achieving.