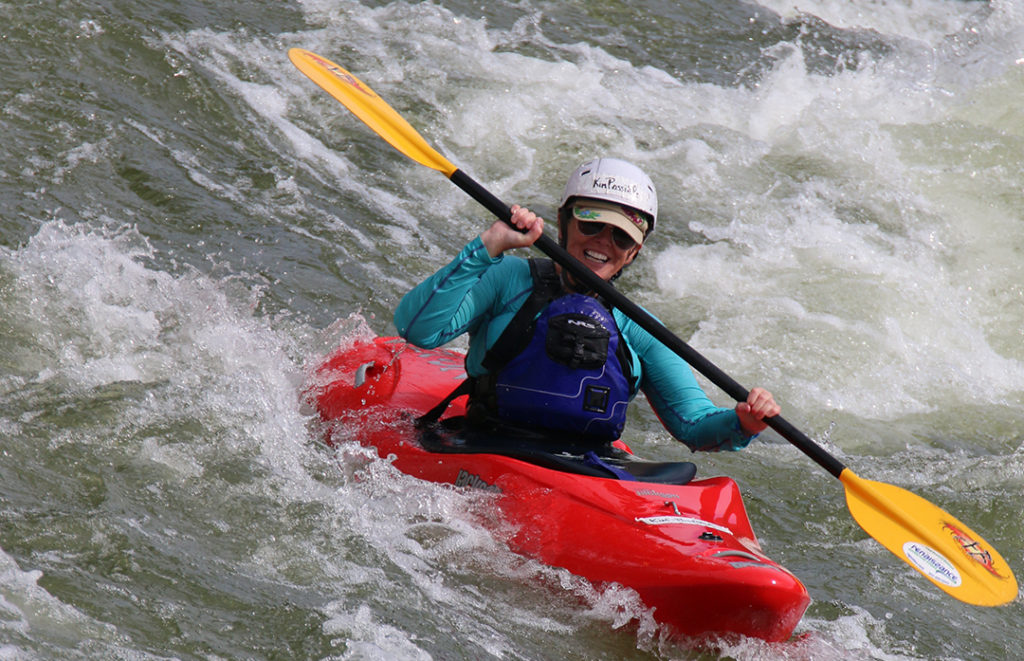 My name is Kim and I am a two time breast cancer survivor, both cases within the last four years. The first time I had a bilateral mastectomy and the second time (yes, even with no breast you can get breast cancer) I had a lumpectomy, chemo and radiation at Callaway Young Cancer Center. I am a strong woman whose motto all through cancer was, “unbreakable.”

I knew I would beat back my disease while flipping it the middle finger and laughing all through treatment, but I’ve since learned that I’m not your typical patient. I recently attended an incredible and emotional week sponsored by Callaway Young at Epic, an adventure therapy camp for survivors.On my first day of camp I met people who were at various points on their cancer journeys. Some were a few years out from their treatment completion and cancer-free, some were undergoing treatment and had to leave camp for a day, some had less than a year to live. Many of them were struggling to find hope and joy; to find something that would make them feel that life is good and worthwhile. One such camper was No Way (his nickname). He had been to two other camps that I know of, hoping to find some intangible something that would carry him through the remainder of his life, however long that might be. He was melancholy and quiet with an occasional quick, sad smile peeking through his beard. No Way and I and a few other campers seemed to wind up sitting together in the mornings after breakfast. Most of us shared willingly, talking about our struggles and fears, crying, embarrassed by our tears. No Way was a master at deflecting questions back onto others, never really giving us any idea what he was going through. No one wanted to press him to share. On the second day we rode the little bus down the dusty gravel road to the river put-in for our first full day of kayaking. I sat next to No Way in the back of the bus and he started to open up about his tragic experience with colon cancer that had metastasized to his lungs. He had just turned 40, had five children, a wife and was no longer working at Stanford University. He was currently cancer-free but lived with the all-consuming black cloud that it could return at any time. He didn’t know how to live life any more. At the river we were grouped together with a few other campers and our crazy guides, Mateo and Heidi. Right away we all knew we were going to be rock stars, especially No Way who’d been a river rat for many years in his “past” life. We joked, swore and threatened to push each other over in the kayaks. His smile got a little bit brighter that day. 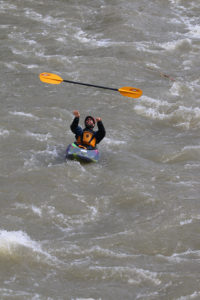 When we reached Dotsero, our pull-out spot, there was a family who was loading up their raft. I noticed he was looking at them intently with a small frown as if to say, “I’ll never do that again.” He told me on the ride home that he used to have a raft that he and his family would take down the river all the time and he’d sold it after he was diagnosed. He was back under the dark cloud. Day three was horse riding instead of kayaking and he opted to remain at camp. We all played corn hole that afternoon and he joined us, laughing and talking smack. I believe he and his partner won the 25th camp-annual tournament and he did a little gloating that evening at dinner. He was getting pretty good at talking smack. Day four and five were kayaking again and the dark cloud he was immersed in completely blew away. He was smiling so much all day, both days that I’m sure his cheeks had to hurt. When we stopped in Glenwood Springs on day four he played in the wave continuously while others ate lunch or took turns attempting to surf. He darted in and out of the man-made wave, practiced flipping and studiously followed advice given out by the guide named Bam Bam. Later, as we floated from rapid to rapid, he talked about how he was feeling like there was still a lot of life left to live, a lot of things that he could still enjoy. He had forgotten how much he loved to kayak and thought he might get back into it. I wanted to cry and laugh and hug him. I felt honored to witness his rebirth. It was one of the most moving things I’ve ever experienced and something I feel blessed to have been a part of. Epic did that for him and for me and will do that for other survivors. It’s more than a “camp” for people who have gone through cancer. It creates a bond between people who have suffered a similar disease. Bonds that can’t be formed in a hospital environment or a weekly support group. It’s a place that renews passion, hope, joy and the will to fight. Its name says precisely what the experience is – Epic.