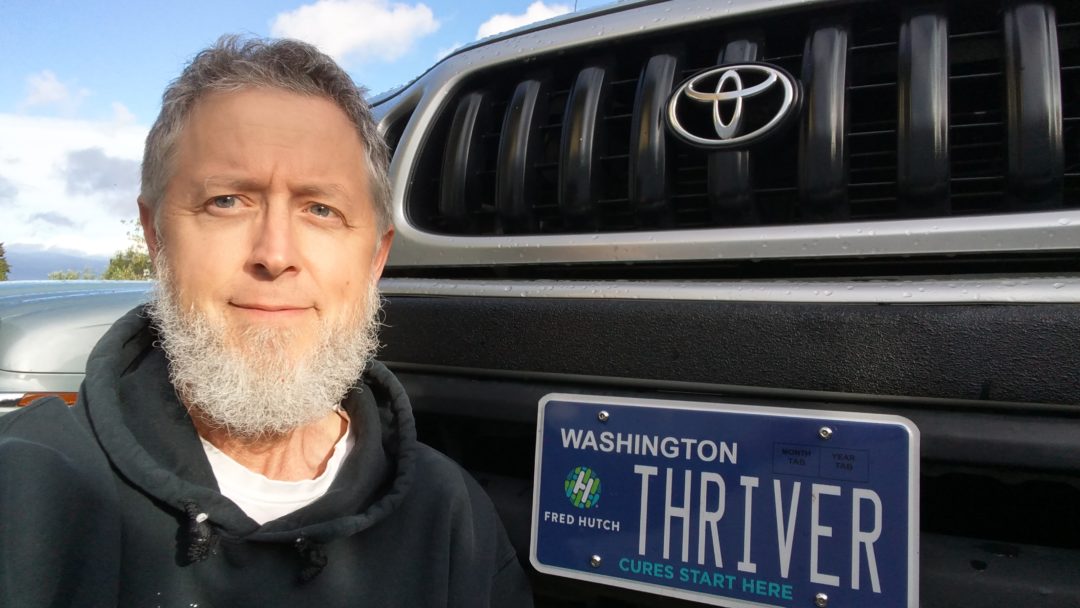 “To young men contemplating a voyage I would say ‘Go.’”

I wonder what old Josh would say to one who found himself thrust into a voyage without time for prior contemplation? Or to the one on a voyage that would continue for a lifetime?

I suppose that growing up at a lighthouse on the coast of Washington lends a bit of a maritime twist to my words. One great childhood memory is the tremendous November gales that would lash my bedroom windows. Waves pounding the base of the cliffs 150 feet below the house generated great billows of sea foam. They would sail past the windows or strike the glass, sliding slowly downward in the pelting rain.  The house was well built and stood unshaken through it all.

If my own cancer experience has been a “voyage,” it certainly began without preparation. My childhood had been a comfortable downwind run. Then Memorial Day weekend when I was 13, what originally presented as severe flu was identified as Hodgkin lymphoma, stage IIIB.

The next five years are a bit of a blur of surgeries and other treatment, relapses and periods of watchful waiting. In the 1970s diagnostic imaging consisted of ultrasound and X-ray. There were no MRIs or PET scans. CTs were just on the cusp of being introduced. Cancer staging was typically done by exploratory surgery.

Ultimately, my high school “curriculum” was comprised of four exploratory and debulking surgeries, 75 radiation sessions from jaw to groin known as total nodal radiation, and nine months of the newly developed concept of multi-drug chemotherapy. I achieved complete remission (eventually labeled “cured”) just in time for my high school graduation in June 1979.

The following 25 years I enjoyed great health. Aside from an annual weeklong crescendo of anxiety leading to my medical checkup I found myself thinking less and less of cancer. Those blessed years included many high points: thousands of miles of road trips and sailing ventures alone with my dog, marrying my high school sweetheart, adopting two toddler-age boys from Thailand, raising the boys and homeschooling them aboard our tug/trawler in the Pacific Northwest.

On the surface my body seemed to have weathered well the abusive cancer treatments. However, deep inside a gale of sequelae was taking form. About 10 years ago (30 years post-treatment), a series of health concerns began to be diagnosed. There was something new diagnosed almost every six months. I grew increasingly uneasy when my PCP wasn’t making clear connections to explain the onslaught of so many complex issues. At some point I stumbled upon the phrase “Survivorship Clinic” and that resonated with me. A brief search lead me to the nearest one at Seattle Cancer Care Alliance. They reviewed all my original cancer treatment medical records and produced a surveillance plan along with research-based suggestions for potential health risks in my future.

I now require routine annual exams or procedures with dermatologists, gastroenterologists, endocrinologists, and cardiologists. A physiatrist manages the chronic pain of muscles and nerves damaged by radiation.

Along with the Survivorship Clinic’s advice, I make it a point to try to keep up with advancing medical thought on late effects from the specific treatments I received in the 1970s. To date I have been diagnosed, treated, and followed for arrhythmia, small bowel obstruction, hypogonadism, hypothyroidism, multinodular thyroid, osteopenia/osteoporosis, basal cell carcinomas in the radiation field, progressively worsening dysphagia, fibrotic vocal cords, neuropathy of feet and legs, severely atrophied and spasming muscles in my neck and shoulders, early stage head-drop syndrome, and atherosclerosis of my abdominal aorta and both carotid arteries. Three of these issues have required further surgery. A national leader in treating patients with varying degrees of radiation fibrosis recently told me that his long-term Hodgkin lymphoma survivors who underwent mantel (chest) radiation in the 1970-1980s are by far his most complex patients.

My long list of health concerns is now understood to be due to changes at the molecular and DNA level in the tissues directly exposed to radiation. In combination these diagnoses are now referred to as radiation fibrosis syndrome. All these conditions are expected to be degenerative over the years. In my case the risk of aspiration pneumonia will increase due to impaired swallowing. Eventually I will require placement of a PEG or a J-tube to minimize that risk. Pain control for nerve root and muscle damage will become increasingly challenging.

What have the decades traveling this cancer route provided that can serve me well in coping with present and future stresses? I think Dr. Jamie Aten, disaster psychologist, author, and survivor of stage IV colon cancer may have said it best in his recent book, A Walking Disaster:  Spiritual fortitude is “enabling people to endure and make redemptive meaning from adversity through their sacred connections with God, others, and themselves.”

My gradual development of this skill of making meaning from adversity through connections with others has been slow. I spent much of my time during active cancer treatment alone, by choice. Perhaps that was a mistake. In 2017 I discovered Epic Experience, an outdoor adventure camp for cancer survivors. I spent a week at camp and later volunteered at two more week-long camps. It was there at Epic that I finally began to recognize and value the previously missing connection with others who were on their own cancer journeys. I still struggle in many ways to incorporate others in my journey and my weakness. But the insights and relationships begun at camp have now led me to numerous opportunities to give and to grow.

It is not my goal to live merely for the sake of thumbing my nose at death. I long ago lost my fear of death and of the dying process. What I fear is debilitation, the slowly growing list of activities I find too painful to participate in any longer.

In days gone by, sailors who survived the harsh life of decades at sea would reach a point where they longed for the legendary Fiddler’s Green – the place where it was said that “the fiddler’s music never stopped, the dancers never tired, the rum never ran out, and the sweetest tobacco was always at hand.” Tradition taught that a sailor found Fiddler’s Green by turning his back to the sea, putting an oar over his shoulder, and walking until a stranger asked him what that odd thing was that he carried upon his shoulder. It was then that the sailor knew he had reached his resting place. There are days when that sounds damn fine to me.

From the time I had to cast off the mooring lines of a normal childhood until my present slow passage through a bit of a fog bank, I have found myself near the cutting edge of both cancer treatment and cancer rehabilitation. I was among the earliest to receive the combination of Mechlorethamine/Vincristine/Procarbazine/Prednisone (MOPP). Now I find myself introducing the next generation of medical providers to the realities of radiation fibrosis syndrome.

From my physiatrist/internist’s preface to his second edition of Cancer Rehabilitation: Principles and Practice, Dr. Michael D. Stubblefield wrote:

The art of medicine is extremely important to a discipline as early in its development as cancer rehabilitation is. For many of the impairments we treat, we cannot base our decision making and interventions solely on scientific evidence simply because there is none. Where oncology produces thousands of high-quality studies annually, cancer rehabilitation produces only a handful. While this gap is closing, it will take many more years for our field to mature.

Thank you to the Dr. Stubblefields of the world who press on, leading the medical community in caring for us decades after we completed treatment. Our story is not over.

Thank you to Dr. Robert Rudolph, my hematologist/oncologist who dared to begin treating patients with the barely accepted “risky” new concept of multidrug chemotherapy, MOPP, in the 1970s. You gave me back my life. I hope we’ll meet again one day on Fiddler’s Green to share a pipe and a glass.