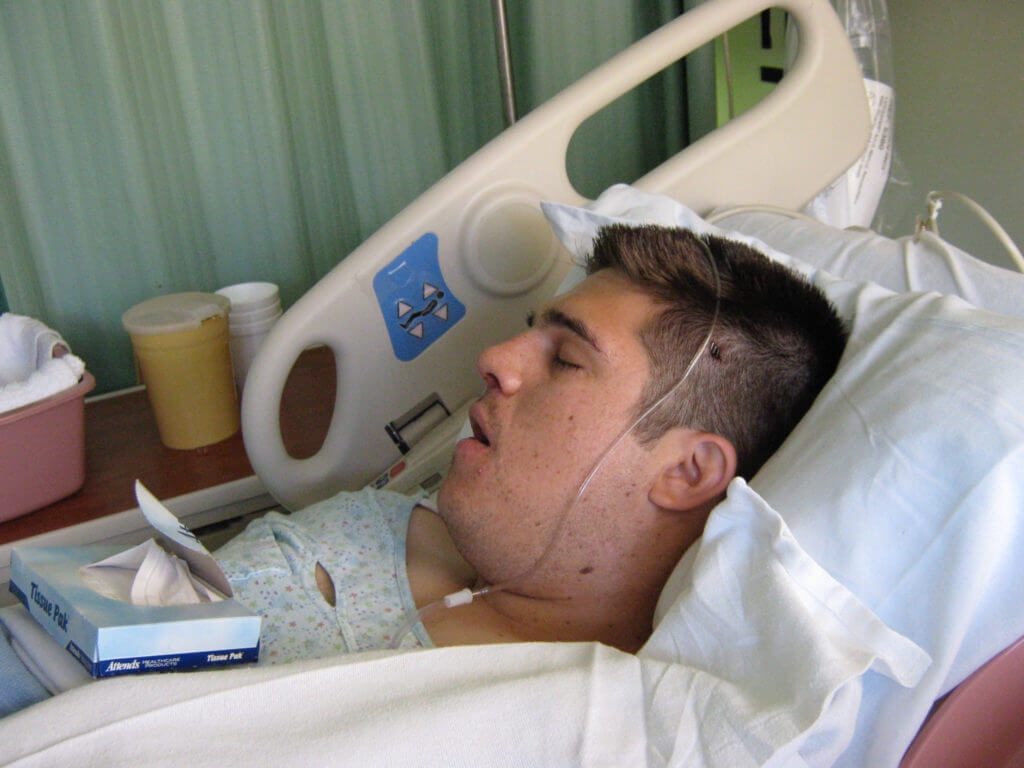 Steve Nash, James Harden, Alex Rodriguez, Roberto Clemente, and Dan Marino are some of the most well-known sports icons who have worn the number 13 on their teams.

For the first time in my life and in my cancer journey, I also get to proudly wear the number 13, as today marks 13 years of clear scans and good health.

I don’t think anyone ever truly expects to hear the words, “You have cancer.” No matter how much you prepare your mind and heart, it hits hard.

I first heard about cancer when I was 12 years old. While in for a physical, the doctor noticed that my right testicle was essentially missing. Later, a slew of tests revealed that my testicle had decided to go on a journey up into my abdomen. Following the surgery that took place a few days later, the doctors informed me, at 12 years old, that I’d need to keep an eye out for testicular cancer.

A lot to digest.

A 12 year old’s dream is NOT to discuss his manhood, and the troubles with it, with his doctor and parents sitting shotgun.

We’re going to fast forward to a few years later, when I started experiencing some pretty intense headaches. Doctors repeatedly misdiagnosed them as migraines. How I wish that they had just been migraines.

The doctors were unfortunately wrong, and we learned the true diagnosis during my last semester of college–on Saturday, February 4, 2007, to be exact. I bumped my head on the TV and ended up in the emergency room with a concussion.

I remember the date because around 4 p.m. my brother, Colin (a.k.a. Wingman) and great friend, Craig, started to get nervous that we wouldn’t make it back from the ER in time to get to the liquor store. Everyone in Colorado knows that liquor stores are closed on Sundays, and Sundays are for football, especially SUPER BOWL SUNDAY.

In case you haven’t guessed, I’m a huge sports fanatic.

So the barrage of tests began: an MRI, CT scan, blood work, and X-rays. Hours went by, and my only priority was that we would get out of the ER by at least 11 p.m. so we could go get beer for the Super Bowl. Forgive my priorities; I was 22 at the time! At 11:30 p.m., I finally asked, “What is going on?” And this is when things started to get really interesting.

The doctor came in and told me that they found a growth and a hemorrhage in my brain, and they were going to start surgery that night by drilling into my brain.

Drilling into my brain.

Of course, without a second thought, I started hysterically losing it. Colin did everything he could to keep me calm, while also trying to stay relaxed in his own “little brother” mentality.

My parents? They were on the phone with doctors, instructing them to not do anything until my mom arrived the next morning from California.

In the meantime, the doctors gave me the official diagnosis, and I was introduced to the pituitary tumor that was pushing on my optic nerve. That’s what had been causing headaches for the past eight years, since I was 14.

My mom, Mama Lou as most of you know her, immediately started calling around to find the very best doctor who specializes in pituitary tumors. Luckily enough, he was at University of Colorado Hospital.

This tumor was also causing a slew of hormonal issues. For example, a normal testosterone level for a healthy 22-year-old male should be in the 400 range. Mine? A whopping 80. My vision was also at risk, so I was frequently tested for vision loss. Low testosterone and ruminating thoughts of becoming blind at 22 is quite a recipe. I was prescribed medication to shrink the tumor, but just five months later, life got even more complicated.

In mid June of 2007, I felt something pretty uncomfortable on my scrotum. I ignored it for a while, but it didn’t go away.

Another conversation about my manhood with, you guessed it, my parents!

Less than two months later, on August 29, 2007, I had an ultrasound, which determined that the bump I was feeling was, in fact, cancer.

I walked out to the waiting room where my mom waited. I sat beside her and said, “Yep, we aren’t going to cry about it.”

Two days later, I had surgery to remove my testicle, and in October I had a RPLND (Retroperitoneal Lymph Node Dissection), which consisted of opening me up from below my belly button up to my chest to remove my lymph nodes and prevent the cancer from traveling faster throughout my body.

I began my recovery and my comeback that day.

Cancer doesn’t just impact you physically. It doesn’t just take your hair, eyebrows, and mustache. It completely flips your world upside down, and you’re essentially forced to roll with the punches and take each day as it comes. Thankfully, I had a great supporting cast, most importantly my family.

I was 22 years old, but I felt like I had to mature to a 50 year old overnight, while most 20-somethings were out at the bars, meeting new college friends, dating, and enjoying life with minimal responsibilities.

Cancer also hit me hard mentally. I suffered from major anxiety and depression. When my anxiety was on high alert, my family had to literally force me to get out of bed at 2 p.m.

Cancer doesn’t just stop or go away once you have been diagnosed, have entered remission, or have had it removed. Cancer stays with you for the rest of your life. I still deal with scanxiety and PTSD every time I have to go to the hospital for a check-up. I am always nervous that some odd pain could mean my cancer is back. Any tweak or twinge I feel, I convince myself it’s the cancer again.

It has now been 13 years since I heard the words “You have cancer.”

Back then I could have never imagined that my own cancer journey would lead to an impactful nonprofit organization that supports the adult cancer community across the country from right here in Arvada, Colorado. For the last eight years, Epic Experience has served over 500 thrivers and fighters, and as my mom likes to put it, “I am the reason for the season.” I often get emotional when I talk about Epic Experience, because I know the lasting impact it has had on people, and I know none of it would have happened if I had never been diagnosed with cancer.

My cancerversary has always been something that I have celebrated, at times more than my actual birthday, and each year has had a different meaning. As I have gotten older I have been able to appreciate life in a different way. I have been able to show more empathy and understanding toward others. My life has had its ups and downs with failed relationships, job losses, and friendships that have grown in opposite directions. But the perspective I gained through cancer has allowed me to train my brain to constantly remind myself: “Everything will be okay. We just don’t know what okay is right now.”

My cancer journey has provided me with a unique view on life. I believe God kept me around for a reason. My family has always run on the importance of giving back and helping others. My Jesuit education has also instilled similar qualities in my life. Epic Experience started because we found that building a community of cancer thrivers that can understand one another is what cures a thriver’s heart. That’s not something chemo, radiation, or any other cancer treatment can do.

I am humbled by what Epic Experience has been able to provide to thrivers and their family members, and my hope is that we will continue to support the adult cancer community for years to come.

Written with gratitude and love,