I have always had a strong desire to find a profession where I could help people. As a childhood lymphoma survivor, I found oncology nursing to be the perfect fit. I love being a nurse, especially for oncology patients. I am fulfilled in my job knowing that I have an opportunity to help people overcome the biggest struggle of their lives. I honestly cannot imagine myself doing anything else. That being said, it is not easy to see people hurting. As an inpatient nurse, I wasn’t sure I even believed in the rumor of “remission” because most of the patients I treated were doing poorly. Being emotionally attached to my job is one thing that I truly value, but after four years I was beginning to worry I wouldn’t be able to keep my positive attitude always seeing people at their worst. Enter Epic Experience camp.

A coworker told me about Epic in December 2016 and mentioned that she thought I would love the opportunity to volunteer. “You get to see survivors doing so WELL!” she told me. This opportunity became a reality, and I was able to participate as a medical volunteer in July 2017. I definitely did not have any expectations going into this camp, but was nervously excited about what the week would bring. As I said, I rarely saw patients after their treatments unless something bad happened. In addition, I was only nine at the time of my own diagnosis and never really dove into the “cancer community” as a survivor, so I wasn’t sure what these experiences were supposed to be like.

On the first day, I drove up to the 7W Ranch with the other volunteers. I remember meeting the volunteers who had previously attended camp and thinking, “All these people are survivors too? No way! They look so healthy!” Just goes to show how much I know. After spending just one day with the volunteers, I couldn’t believe how quickly we had all gotten to know each other. Less than 24 hours and we already had inside jokes. Going to bed that first night I thought, “Man, this whole cancer community thing is awesome,” and I hadn’t even met the campers yet.

The campers’ arrival the following day was so special. I imagine they had the same experience of making fast friends as I did, because they all climbed out of the cars laughing and joking with one another. I was especially excited about spending time with these campers because this camp was specifically for Hodgkin’s lymphoma survivors—a patient population I spend a lot of time with at work but typically lose touch with after treatment.

That first night at campfire was super eye-opening for me. On the one hand, I was able to see how these amazing people had adjusted to their “new lives” as cancer survivors post treatment. On the other hand, some of the hardships they still deal with hit home with me. I could really relate to the fact that, like it or not, cancer had been a defining moment in all of our lives and forever changed us. I cried a lot at that first campfire, which I didn’t expect to do, but was cathartic nonetheless

The rest of the week brought new challenges for the campers every day. I was in awe of how they constantly pushed themselves to new limits and tried new things. Something they don’t tell you when you get diagnosed with cancer is that you’ll feel like your body has betrayed you. Through treatment and side effects, you feel so weak (despite everyone telling you just how “strong” you are). I watched campers learn to trust their bodies again and discover how strong they actually still are. It was an amazing, beautiful, and emotional thing to witness. Some of these campers were less than a month out of treatment and were trying things on their kayaks that I was too scared to do. How cool is that?

I was sad to see my week at camp come to an end. I was so grateful to have met such amazing campers and volunteers. I was excited to continue my involvement in the amazing cancer community I had found. But most of all, I was anxious to return to work. Sounds weird, right? It’s the truth, though. After my week at camp I was able to view my role in the lives of cancer patients in a whole new way. I was able to see these people as they were outside the hospital. I was able to understand their journey in a different way and appreciate that they are not defined by their cancer diagnosis. I felt that I had a new outlook on how I could support my patients in a more holistic way, understanding that they still need support months and years after their treatment ends. Most of all, I felt a renewed sense of purpose in my role. I felt once again the calling of oncology nursing and an appreciation for the truly amazing people I get to meet in my line of work. 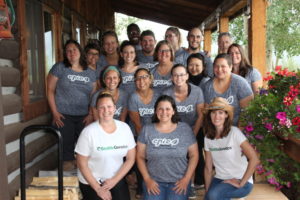